Facility Location
City & country
Panarea (ME) (Italy)
Via San Pietro 1
Description & contacts of the access provider
Legal name of organisation
OGS - Istituto Nazionale di Oceanografia e di Geofisica Sperimentale
Infrastructure contact - Primary contact
Cinzia De Vittor
cdevittor@ogs.trieste.it
RICC contact - Secondary contact
Michela Vellico
mvellico@ogs.trieste.it
Facility Availability
Availability per year
4 campaigns
Expected duration of single experiment:
5 days + 2 travel days
Operational or other constraints
Specific risks:
Weather conditions may impact on the work schedule. In case of rough sea it is not possible to perform any sea survey or sampling. Please consider this when planning your campaign. During the summer time it is not possible to park a car in the island. In case you have to transport working equipment, you have to ship it.
Download facility datasheet

Panarea is a natural laboratory where thermo-magmatic CO2 is leaking at substantial rates from the seafloor at water depths ranging from 5 to 30 m. The majority of this CO2 is released in an area between two islets located 3 km to the east of Panarea (Lisca Bianca and Bottaro). This natural CO2-release field (c. 3 km2 ) has been active for centuries, with gas emanating from a series of NW-SE and NE-SW trending fractures (Fig.1).

This natural laboratory provides the opportunity to study gas migration in different structural and geological settings. It can be used to study the ascent of CO2 through sedimentary strata, to decipher the dynamics of gas bubble and droplet plumes, to understand the impact of CO2 on benthic organisms and marine ecosystems, and to test and improve CO2 monitoring techniques.

Due to the unique characteristics of this site, the Italian Ministry of University and Research (MIUR) financed the setting up of a permanent laboratory, which offers logistical and scientific support to the researchers utilising the site. This laboratory (ECCSEL Nat Lab-Italy) is a component of the ECCSEL (European Carbon Dioxide Capture and Storage Laboratory Infrastructure) initiative 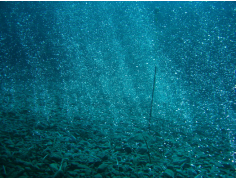 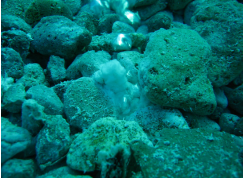 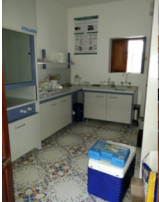 In the early 1980’s researchers began to conduct gas geochemistry surveys of the area showing that the system was relatively stable in both gas chemistry (e.g. 98% CO2, 1.7% H2S plus other trace gases) and flux rates (7-9 x 106 l/d). On November 2 and 3, 2002, a gas outburst event increased the total gas flow rate by about 2 orders of magnitude (4 x 108 l/d), with large volumes of gas reaching the water surface. Flux rates began to decrease towards pre-outburst conditions about 3 months after the event. The majority of fluid release points are gas only, although various points also release water of different origin, ranging from geothermal to seawater endmembers that are mixed to variable degrees.

Based on the range of depths and relatively high and persistent gas flow rates, the occurrence of both gas only and gas-water seepage, and its close proximity to shore, Panarea represents an exceptional location to study natural processes and impacts related to shallow seabed CO2 leakage.

This site has been studied in the framework of several European projects with an integrated physical chemical, biological approach for a more complete (and realistic) understanding of the possible consequences of a leak from a CO2 storage site into the overlying water column.

OGS is the responsible of this infrastructure and in collaboration with other research institutes and universities (such as the University of Rome, La Sapienza), manages the permanent laboratory, making available the longterm series of multidisciplinary data collected at Panarea and offering logistical and scientific support to the researchers utilising the site.

The on land installation (Fig.2) is close to the loading wharf and contains about 90 mq of laboratory space, which are fitted out for general-purpose and dedicated use, and several outside open spaces that can accommodate a variety of shifting needs and equipment. Scientists also have access to a well-equipped computer and electronics lab. The on land installation will also be equipped to maintain, calibrate and real time connect the permanent sensor network, which will be installed in correspondence of the natural CO2 leakages.